Sarlat – a city steeped in history 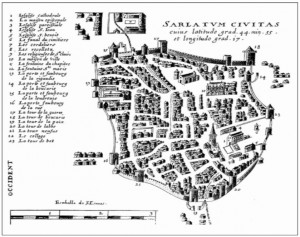 The story of Sarlat started in the ninth century with a large Benedictine abbey around which the city later developed. The Benedictine monks had been forced to leave Calabre abbey at Calviac when it was ruined by the Saracen and Norman invasions of the eighth and ninth centuries. The relics of Saint Sacerdos, which had been kept at Calviac, were moved to Sarlat abbey, safely situated at the heart of a region spared by the Vikings. At the start of the tenth century it was only a convent, surrounded by some settlements of houses belonging to Bernard Taillefer, Count of Périgord and Angoulême. The Count made the abbey independent and by observing the reform rules of Cluny the convent could expand its territory and bring prosperity and wealth to its inhabitants. In the twelfth century the abbey placed itself under the protection of the Holy See and it was rebuilt between 1125 and 1160. At the time, Sarlat was already a lively and rapidly developing centre of activity. In the thirteenth century Sarlat became a real city with a consulate and municipal institutions. The act recognizing the rights of the community was proclaimed in 1299. However, the independence of the city from the convent and abbey created a hostile climate.

In the fourteenth century Pope John XXII elevated Sarlat to the rank of diocese and entrusted it to Raymond de Roquecor. The abbey church became Sarlat cathedral, abbots were replaced by bishops and the city underwent an architectural transformation. 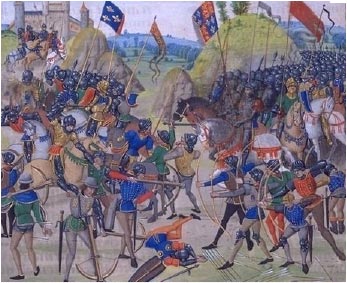 During the Hundred Years War (1337-1453) the inhabitants supported the troops of the Duke of Anjou in the fight against the Black Prince, son of England’s King Edward II, who was creating havoc in Aquitaine, laying vast parts of the region to waste. The ‘Sarladais’ succeeded in driving the Black Prince’s troops from the various castles along the River Dordogne. To reward them for their loyalty, Charles V confirmed their privileges and exempted them from paying any taxes for a period of twenty years. In 1360, King John the Good of France, incarcerated in London after losing the battle of Poitiers, signed the Treaty of Bretigny and Sarlat became property of the English. Ten years later, constable Du Guesclin decided to side with the King of France, after having pushed the English from Sarlat. At the dawn of the fifteenth century, the city was surrounded by fortified castles, once again occupied by the English and forced to deal with them to avoid certain ruin. A 1410 treaty shows that the city did not surrender to the English, only stipulating that they could buy food and trade with the inhabitants. The sixteenth-century ‘French Wars of Religion’ did not spare Sarlat. Commander of the troops of the Reformed Church, Geoffroy de Vivans, had distinguished himself in many a battle, including the sacking of Saint Denis basilica. He cleverly took advantage of Shrove Tuesday Carnival to invade the city in 1574.

Some years later, in 1578, the Vicount of Turenne, Henri de la Tour d’Auvergne heading six thousand infantry and nine thousand horses had to beat retreat after twenty days of siege. Ever since, this event has been remembered with a procession on the 14th of December.

In the seventeenth century Sarlat was invaded by ‘rebels’ lead by the Prince of Condé (1653). This didn’t last long though. Three months later they were chased away by the local population, in spite of a 1200 men strong garrison. As a token of his gratitude Sun King Louis XIV exempted the city of Sarlat of paying any taxes. During the French Revolution of 1789 the majority of gentry in the area greeted the new order with hostility, but the new ideas were embraced by the city’s bourgeois. A multitude of ‘Jacqueries’ (peasant revolts) shook the surrounding countryside. 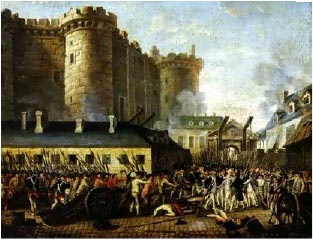 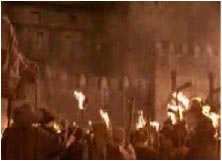 In the twentieth century the city was miraculously saved by the so-called Malraux law of August 4th, 1962. This French law on the restoration of conservation areas was applied for the very first time to Sarlat. The centre of this small medieval town with its 65 protected monuments served as pilot project for putting financing and restoration criteria into place.

Famous people who lived in Sarlat

(1200s) Troubadour Elias Cairels’ fame reached far beyond France. A large part of his original poetry has been preserved.

(1500s) Etienne de la Boetie – Author of ‘Discourse on Voluntary Servitude’, friend of Michel de Montaigne, one of the most influential writers of the French Renaissance.

(1700s) Jacques de Maleville – one of the authors of France’s Civil Code.

Our historic city is famous for its many well preserved monuments, mostly dating from the late middle ages, between the 12th and 16th century.

The old centre consists of a maze of picturesque cobbled streets and alleyways lined with astonishing architectural buildings.

Must-see and must-visit in Sarlat

The various inhabitants of this abbey have given their names to our company, the house and the apartment we are renting out.
Les Dames Blanches: These ‘White Ladies’ occupied the abbey from 1947 onwards.
Le Clos de l’Abbaye refers to the cloister

Les Colettines was the name given to the Clarisses, sisters of the order founded by Saint Clare of Assisi in 1212.

Legend has it that when God distributed castles in France, he emptied out the contents of his bag when flying over the Périgord. This would explain the thousand-and-one chateaux which adorn the region’s beautiful countryside.

The bastides were a new type of town, different from the medieval cities which were built around a castle, abbey or church.

Apart from their impressive architecture, the region’s many chateaux and manor houses also offer some of France’s most beautiful and enchanting gardens.

The Most Beautiful Villages of France

Some of the Most Beautiful Villages of France

It’s not just above ground that nature knows how to impress: the region’s many caves are masterworks of limestone sediments and intricate crystallisations, like a fairy tale mineral forest in the womb of the earth.

And amidst all these caves there’s one that was touched by the first humans living here 18 000 years ago: ‘the Sistine Chapel of prehistory’, Lascaux.

And not to forget…

Les Eyzies – The French capital of prehistory, with its national museum; Périgord Noir Music Festival (August/September) with its concerts benefiting from exceptional acoustics in the churches where they take place; The Dordogne River which can be explored by canoe or ‘gabare’ boat; The picturesque villages with their well preserved traditional architecture and ‘lauze’ (stone) roofs.

Breathe in the local atmosphere by visiting a farmers’ market or joining in the fun at a summer festival and create sweet memories for life!